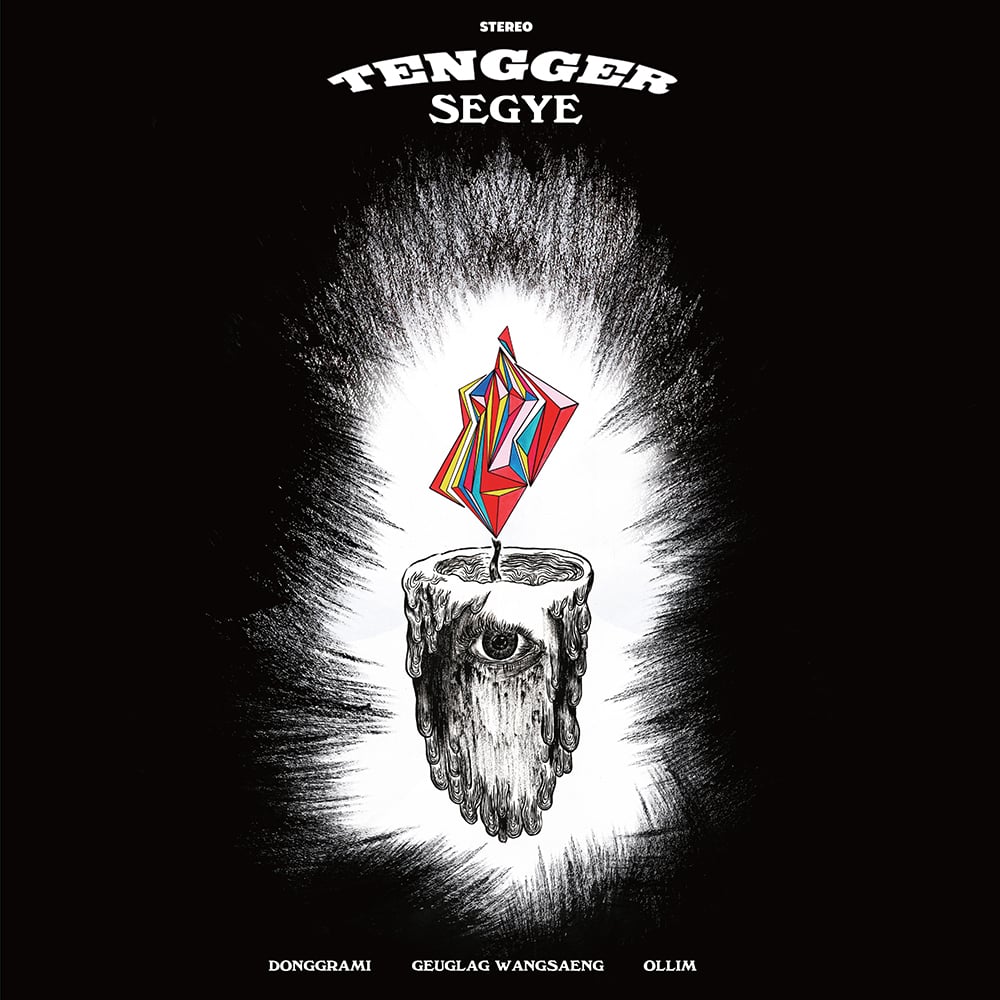 There's a symmetry to be had here: duo’s name translates to “Skygod” and “heaven”, duo provides soundtrack for “aural hang-gliding”. What looks to be a simple equation becomes far more immersive and lush as you soar in and out of the grooves of “Segye”. Your guide this time out: Tengger.

In ’05, itta (voice, Indian harmonium, toys) and Marqido (analogue synths) began a new, shifting musical life as 10 in Seoul, South Korea. To mark the massive March ’11 earthquake in Japan, 10 took a step in their evolution by becoming (((10))). The ground moved in a much different way when son RAAI arrived in ’12. Not missing a beat, or a good sign, (((10))) expanded to become Tengger. itta and Marqido, now with RAAI, incorporated all the adventures their self-described traveller family might have into their immediate lives and the sounds being being generated as Tengger. Touring the US, Asia and Europe, Tengger assimilate audience reaction and the myriad experiences of exploring and turn those elements into pillars of their sound, raw material for both foundation and take-off. It’s no surprise, and absolutely fitting, that ‘Segye’ (세계)–Korean for world–encompasses the mind, time and space.

‘Segye’ began taking shape in ’16 at Slow Slow Quick Quick (Seoul) during the demonstrations against President Geun-hye Park. Then, during the candle demonstration, artist Beck Jeajung made his voice heard and seen. Tengger, picking up on the synchronization, asked Jeajung to bring his art to the album taking shape. This environment, this bigger picture of family and community—this ‘Segye’—feeds the album as much as Tengger's own inner circle and outbound adventures. Their lush electro/drone psych may be the product of knobs, wires and electricity, but it's made from the experiences that only the real world can provide, both immediate and distant. These inner and outer dynamics, often at odds with each other, fuse to give the pulsing of ‘Segye’ a subtle luxuriance that celebrates the humanity inherent in their music. itta's voice melds and dances with the sonic patterns and processes, to continually layer, move and build on each other to not only lift the listener upwards, but to take them to places to take off again; destination to be determined.

Tengger have simultaneously crafted a sonic travelogue of their own journeys, a blank ledger to absorb and reflect your own wanderings, and a soundtrack for an infinite number of voyages to be taken no matter where you find yourself.

Cardinal Fuzz (UK/Europe) and Sunrise Ocean Bender (US/NA) are proud to pair up again to bring you the sounds of Tengger. Limited edition of 300, red vinyl, multi-format download included. Releases 02.22.19.